From Smart Places Network
Jump to: navigation, search
This page is a translated version of the page Alpine Space Regional Timber Award and the translation is 100% complete.
Other languages:
Deutsch • ‎English • ‎français • ‎italiano • ‎slovenščina

In the framework of the European CaSCo project, the Regional Timber Award was first announced and presented to key projects in which regional timber was used. The competition was run in 5 countries (Germany, France, Italy, Austria and Slovenia) and a total of 10 buildings were selected and presneted with the award. 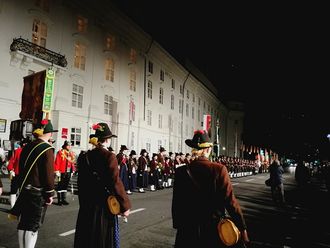 The award ceremony took place on 20 November 2018 in Innsbruck as part of the EUSALP Annual Forum, which is the central annual event of the EU Strategy for the Alpine Region. This is the most important political forum where future development and strategies for the Alpine Region is discussed, and strategies are adopted and political decisions taken. Therefore, the forum is attended by numerous ministers, politicians, stakeholders and decision-makers in the Alpine Space. In 2018 Tyrol held the presidency of EUSALP and consequently the forum took place in Innsbruck. At this organisationally and politically high-level event awards were presented to the winning applications for their climate protection efforts and inspiring practice. 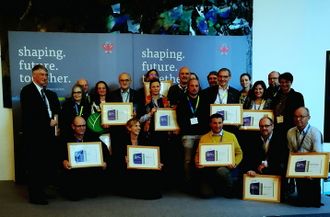 The Alpine Space Regional Timber Award Ceremony at the EUSALP Annual Forum at the end of 2018; Photo: HOLZ VON HIER

Background of the award and its importance for climate protection

The use of timber for products with a long service life, e.g. timber constructions, is generally considered instrumental in ensuring climate protection. Timber is a preferred material since it replaces non-renewable materials and because of the amount of CO2 stored in wood. The amount of savings depends on the actual CO2 emissions generated throughout the wood product manufacturing cycle, which is profoundly affected by wood transport routes from the forest to the final destination, i.e. construction site. Since wood product emissions often differ considerably among various companies in the Alpine Space, fluctuations can also be observed in the emissions linked to transport processes, depending on whether wood was processed in the region or imported from remote countries, many of them located outside the EU.

In general, Europe has recorded a considerable increase in transport distances in nearly all wood products and assortments. It should be noted that transport emissions are multiplied total combined emissions generated by production.

In most cases, excessive transport is not needed as quantities could be sourced from the regional supply chain. The finding is backed by analyses that were presented in the framework of the European inter-regional ‘CaSCO - Carbon Smart Communities’ project, with participants coming from 11 partner organisations from Germany, France, Italy, Austria and Slovenia.

The overall objective of the project is to reduce carbon dioxide emissions in the Alpine Space and provide incentives and instruments of public bodies to promote the use of locally sourced timber. A new award for the use of regional timber was announced in the framework of the project.

The Alpine Space Regional Timber Award differs from many other timber construction awards in that it is explicitly concerned with the environmental performance evaluation of the timber used and its previous supply chains. The actual CO2 savings resulting from short transport routes carry a 40% weight, innovative approach to regional timber sourcing a 40% weight and transfer potential is rated at 20% of the final score. The HOLZ VON HIER© environmental and ecological label is an important and useful tool.

The outstandingly short wood supply chain from the forest to the construction site was proven and recognised for four buildings in Germany and Austria which had obtained the HOLZ VON HIER© certificate. For other structures, the CO2 performance was evaluated manually in the framework of the CaSCo project (through the Holz von Hier initiative) on the assumption that the data submitted were accurate. Since appropriate documents compliant with the requirements of the Holz von Hier label often cannot be submitted, these buildings cannot acquire Holz von Hier certificates. Several buildings in Slovenia were constructed by the Slovenian National Forest Service using timber from its local forests, ensuring that the transport routes were really short. In Italy some buildings were awarded for their originality. These buildings were made by investors from their own wood. In France the proof of origin for the round wood was issued in Bois des Alps, and the Auvergne RhoneAlpes initiative and the regional initiative guarantee that all the following steps were also carried out in the region.

The aesthetic and creative value of the projects

The aesthetic value of the projects and their originality show how beautiful typical wooded structures can be and illustrate the possibilities offered by wood in public and industrial construction. Every building can serve as a good-practice example in its region.

And so it will continue