The origin of the wood is important. When growing, forests integrate the climate-damaging CO2 from our exhaust gases into their wood mass. But only in sustainable forestry can round timber extraction be considered "CO2 neutral". Wood from overexploitation of primeval forests is not CO2 neutral.

Flyer Origin and use of local and tropical woods.ogg 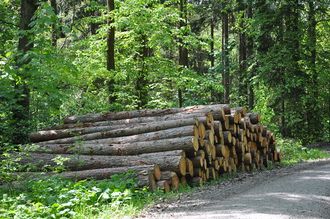 Timber from sustainable managed forests is an environmentally friendly raw material (Foto: HOLZ VON HIER)
I buy climate friendly
Products made of timber of short distances are climate-friendly and support your region. However, the timber market is international and you can't see the distances to wood. Ask for your next wood product for products with wood of the short distances, for example with the certificate HOLZ VON HIER. 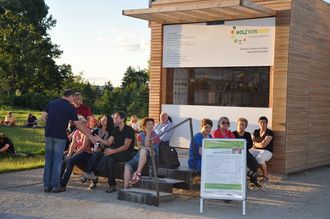 Visitors are waiting early in the morning for the opening of a HOLZ VON HIER pavillon (Foto: HOLZ VON HIER)
Domestic forests - protection through use
In Germany (DE), France (FR), Italy (IT), Austria (AT), Slovenia (SL), the forest laws are strict and the sustainability of forest management is closely monitored. In DE and AT, 70% to 90% of forest areas are certified with Forest Management (FM) labels for sustainable forest management (FSC-FM, PEFC-FM).

Especially many forest edge trees have interesting wood but are often only processed into firewood. (Foto: HOLZ VON HIER)
Using local wood
Many raw materials for products are not found at all in Germany and Europe and have to be transported over long distances. The only resource that is potentially permanently available in Europe is wood from sustainably managed forests. The proven use of short distance wood in wood products, with logs from our sustainably managed domestic forests is best practice in climate protection..

Find products made of climate-friendly wood from the short distances in the Alpine region purchasing options. 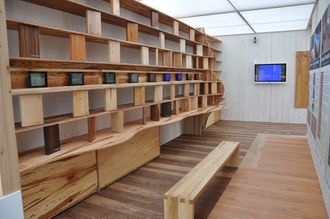 Eine HOLZ VON HIER Exhibition in a micro location. Floorboards made of shore oak, hornbeam, larch (Foto: HOLZ VON HIER)
Domestic wood instead of tropical wood
Only 30% of the world's forests are primeval forests. Their protection needs absolute priority in climate protection. Every year, 7-13 billion tonnes of CO2 are released through the overexploitation of primeval forests. It would be cheaper for all of us to protect primeval forests through payments than to bear the enormous costs of climate change (Stern Report).

About 50 - 70 % of all species in the world live in tropical forests. Tropical jungles are hot spots of biodiversity. Their protection represents the greatest contribution to the preservation of biodiversity worldwide. In the Amazon alone, up to 1,000 tree species occur per km2. Up to 600 different insect species live on a single jungle tree species alone.

Domestic wood instead of tropical wood ! In Europe, more than 70 tropical woods are used, at least 61 of which are from overexploitation or from globally endangered tree species. Only about 11 woods are available with eco-labels, but are also traded without them. 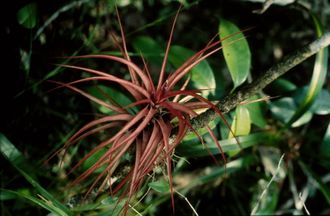 Every little branch on tropical forest giants is a habitat for many animals and plants (Foto: HOLZ VON HIER) 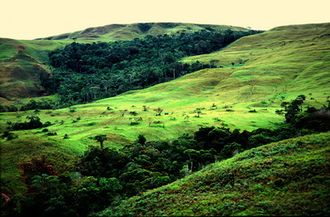 Ruthless exploitation of tropical forests: a major cause of the worldwide extinction of species. Picture Clear-cutting Venezuela (Foto: HOLZ VON HIER)
I protect primeval forests
I help with!' Every year Brazil loses an area the size of 2,194,000 football pitches to primary forest! Together with the "Regenwaldinstitut Freiburg", WOOD FROM HERE is trying to collect donations so that primary forest areas in Brazil can be bought and protected. This is more topical than ever today, especially in Brazil.

To refrain from using products made of tropical wood because you have come to know the beauty of native woods: Gefährdete Tropenhölzer nein danke.

to avoid products with palm oil, thus serving the environment and your health Palmöl nein danke. 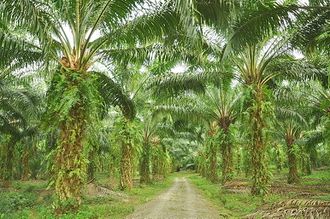 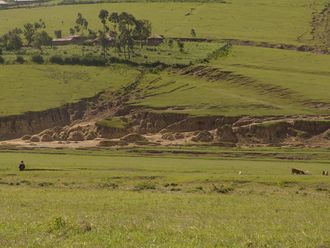 Without the forest, there is enormous soil erosion in the tropics. Picture Tanzania (Foto: HOLZ VON HIER)
Bioenergy of short distances
Pay attention to short distances here as well.

Bioenergy in the form of firewood, wood chips or pellets has long since ceased to come only from within the region. On the contrary.

For example, if you can buy firewood directly from the local forest owner, this is certainly optimal for the climate balance of your feel-good warmth with wood. 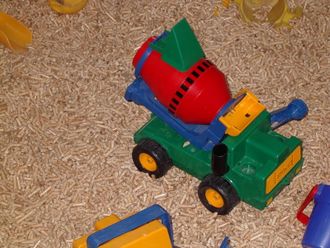 If one wants to buy pellets of short distances, one must pay attention to appropriate proofs (Foto: HOLZ VON HIER)
I buy my logs locally
Hier finden Sie

(1) Addresses of forest owners' organisations in the Alpine region who can surely name forest owners in their ranks from whom you can buy your firewood directly and regionally can be found here: Karte Waldbesitzerorganisationen

(2) In the "Rundholzbörse Vorarlberg" forest owners can offer felled round timber lots and processors can buy round timber: Rundholzböre Vorlarlberg

(4) Map with suppliers of pellets from proven with wood of short distances: Karte Pellets.

(5) Map with sources of supply for wooden building materials made of wood of short distances: Bezugsmöglichkeiten 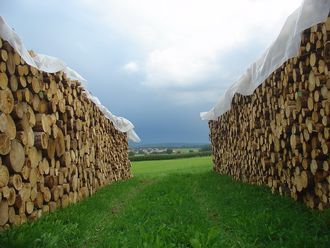 Firewood results from the thinning of our forests, sawable round wood should not become firewood (Foto: HOLZ VON HIER)